SPECIAL OFFERS | REVIEWS | IN AND AROUND | EVENTS | FOTO | NEWS |
THE PALIO OF NORMANNI IN PIAZZA ARMERINA: 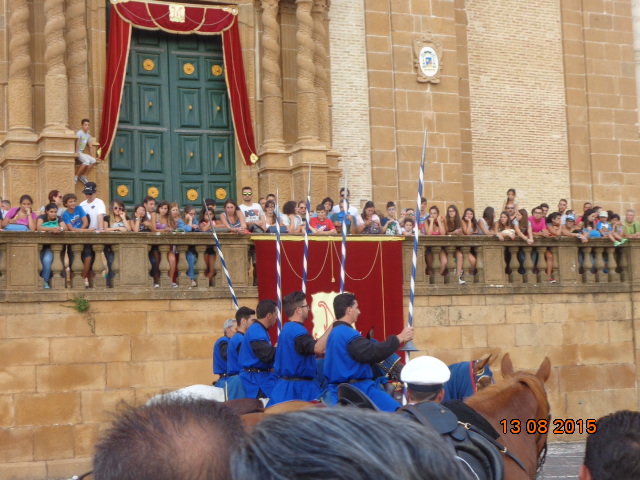 The "Palio dei Normanni", in honor of Our Lady of Victories Patroness of the city a popular tourist attraction in Piazza Armerina which takes place August 12 to 14.

After a feature costume parade reminiscent of King Roger the Norman entrance in the town, the next day, in the city stadium, will compete in various contests of skill knights representing the four city districts.

At the district winner is awarded the Palio, which consists of a banner depicting the image of Our Lady of Victories. Past winners of the Normans.

The Norman Palio, an event of international significance which takes place on 13th and 14th of the month in Piazza Armerina (EN), a historical-religious enterprise commemoration that time came the Normans in Sicily around 1060, led by Conte Ruggero d ' Altavilla, last son of Tancredi and brother of Robert Guiscard said.

The conquest of the island dominated by the Arabs appeared as a holy war of religious freedom: the Pope Nicholas II do, in fact, to Roger, as a sign of investiture and hope for liberation from Saracen domination, a cloth bearing the image of Our Lady and Child, painted, it is said, to St. Luke's hand.

The banner of war, was the signum victoriae that port from victory to victory until Ruggero Pluto (the ancient Piazza Armerina), which was erected in the square of the Norman militia weapons.

So it was that the Conte normanno don the city, which was tied by a bond of alliance, the labarum received by the Pope that soon was considered miraculous and made the object of popular cult.

Following these events, the boundary between history and legend, on the occasion of the celebrations of Maria SS. Victories of the patron saint of Milan is The Norman Palio.

The event recalls the different phases of the festive entrance of Conte Ruggero of Altavilla in the ancient city of Pluto:

The first day a historic carousel remembers the entrance of the Norman troops in the city and offer the keys to the Conte Ruggero.
The second day of the Palio o Quintana, thrilling joust between four teams of five riders in period costume, representing the four quarters of the ancient Pluto (Monte, Channels, Castellina and Casalotto), in the presence of Conte Ruggero and dignitaries citizens.