SPECIAL OFFERS | REVIEWS | IN AND AROUND | EVENTS | FOTO | NEWS |
DUOMO OF SAN GIORGIO IN RAGUSA:

DUOMO OF SAN GIORGIO IN RAGUSA 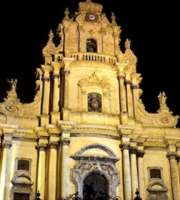 The duomo di San Giorgio is one of the highest expressions of Baroque church architecture worldwide, the early church stood at the eastern end of the town, where is still the old portal. It was rebuilt in place of St Nicholas Church, which until the 16th century was of the Greek Rite.T
he project was commissioned the famous architect Rosario Gagliardi, you retain the old original drawings, it is characterized by the monumental façade that surrounds the Bell Tower in the statement and ends with a bulbous Spire.

Its location at the end of a high staircase and obliquely than the square below accentuate the grandeur and plastic effects. The neoclassical dome in a double shell, resting on two rows of columns would be designed by master builder ragusano Carmelo Cultraro, inspired by the dome of the Pantheon in Paris.
Inside are statues of Gagini and is the masterpiece of Serassi who call Organum maximum organ as existing at the time the best art synthesis consisting of 3368 reeds. In the chapels of the aisles are canvases of the best artists of the 18th century Sicilian: D'anna, Tresca, Manno. Over the side doors are the two statues that are brought in procession through the streets, during the Festival of San Giorgio: the statue of the Saint on horseback by sculptor palermitano Bagnasco, who built it in 1874, and the great case-silver foil embossed reliquary, made by the silversmith 1818 palermitano Domenico La Villa.
The Windows of the nave are closed by coloured glass, artistically decorated: throughout the church there are 33 well, depicting 13 episodes of the martyrdom of Saint George, 14 6 figures of Saints, miscellaneous symbols, custom designs of Amalia Panigati.
The architecture is not so much correspondence in Italian churches, but it is much more similar to Northern Europe, like London's churches Hawksmoor or those of Neumann in Franconia, which develop in the Central Party theme Tower façade.

DUOMO OF SAN GIORGIO IN RAGUSA