SPECIAL OFFERS | REVIEWS | IN AND AROUND | EVENTS | FOTO | NEWS |
THE VILLA OF THE TELLARO OF NOTO (SYRACUSE):

THE VILLA OF THE TELLARO OF NOTO (SYRACUSE) 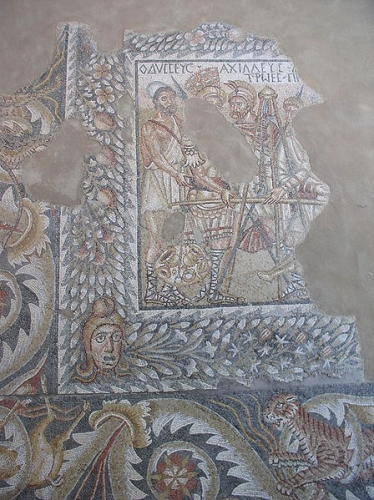 In 1971, as a consequence of illegal excavations, a villa of the late imperial Roman age was identified and subsequently explored in the territory of Noto (Syracuse), on the right bank of the Tellaro river, hence the name of the villa. It is located on a low elevation of the ground, below a farm from the seventeenth-nineteenth century.

The difficult and long exploration work that lasted for more than twenty years, has returned the central body of the ancient complex, organized around a peristyle of about 20 meters on the side, surrounded by living environments located on the north and south sides, while east and west sides the construction of the masseria has almost totally destroyed (west) or severely damaged (east) the ancient masonry structures.
On the southern side they are reduced to foundations but it was possible to identify in the central point of its development an apsed environment with a section of the front porch paved with polychrome mosaic with geometric motifs.

On the north side, three rooms retain partly the strong perimeter structures and the mosaic floors. The front porch conserved for about 15 meters in length and 3.70 m wide has a mosaic floor with elegant laurel festoons forming circular medallions that delimit curved sides octagons. The naturalness of the composition and the variety of the polychrome are remarkable.
The most oriental environment on this side of the portico, presents a patchy mosaic floor with the central representation of the scene of the redemption of the body of Hector with the figure of Ulysses, Achilles and Diomedes on one side and the Trojans with Priam on the other, figures the latter not preserved. All are present at the weighing of Ettore's body - of which only the lower extremities are preserved - evidently placed on a plate a conserved of the scale, which was offset by the other plate with the gold of the redemption.

The whole scene is framed by a large and elegant band with enveloping gazes and powerful bodies of animal figures.
Contiguous from the west is another environment with the lacunose pieces of a polychrome floor mosaic, presenting four sumptuous festoons that branch off from as many craters placed at the corners of the environment. The semicircular areas delimited by the festoons are affected by symmetrically arranged scenes with scenes each presenting a satyr and a dancing menade at an altar.
The polychrome floor mosaic of the third environment from the west presents on all its extension hunting scenes framed in a perimeter band with meanders alternating with representations of birds.
The hunting scenes on registers not in schematic distribution gravitate around a central female figure sitting on a throne of rocks surrounded by rich vegetation.

Below is an extraordinary outdoor banquet scene with the representation of the diners placed around the stibadium under a tent stretched between branches of trees.
The mosaics, dated to around the middle of the 4th century d.C., find the most immediate comparisons in those of Piazza Armerina and some centers of Proconsular Africa.

The villa of the Tellaro, with that of the same period discovered in the province of Messina in Patti Marina, with the most famous of Piazza Armerina, are fundamental reference parts for the knowledge of the socio-economic structure of Sicily in the late antiquity.
The mosaics of the three rooms on the north side of the peristyle have been detached from the floors and restored in the laboratories of the Soprintendenza di Siracusa. They will now be exhibited in Noto in the Church of S. Domenico from 13 July to 30 September 2003. They will then be relocated to the rediscovery site where work is being completed for the construction of an adequate coverage of the rooms with mosaic floors and renovation works and museographic arrangement of the seventeenth-century masseria built on the villa.
To improve the possibility of use of the archaeological complex, a link will be made to the Syracuse-Gela motorway, which will allow easy access to the site.

THE VILLA OF THE TELLARO OF NOTO (SYRACUSE)